Based on the acclaimed novel of the same name, A Girl is a Half-formed Thing follows the inner narrative of a girl from birth until the age of twenty with vivid intensity and originality. This is a character of astonishing resilience and intelligence; someone determined to make sense of things amidst the crushing Catholicism and poverty of her Irish childhood. Winner of numerous literary awards including the Baileys Women’s Prize for Fiction 2014, The Desmond Elliott Prize 2014, The Kerry Group Irish Novel of the Year 2014, The Goldsmith Prize 2013, and listed in Best Books of the Year by The New York Times, The Guardian, NPR and many more, Eimear McBride’s tale plunges us into the psyche a girl with breathtaking fury and intimacy. 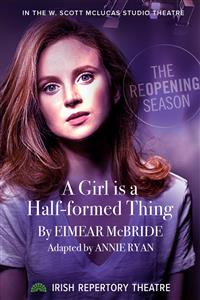 A Girl Is A Half-Formed Thing