Take a trip through musical theatre history in this upbeat one-man journey through the life, music, and artistry of George M. Cohan. This Performance on Screen is a dazzling showcase that reveals the essence of the man, his music, and the era of show business he helped shape. Taking a look at the ride of Cohan’s life, we learn he definitely meant it when he said “Give My Regards To Broadway.” Featuring hit songs such as “Over There,” “Forty-Five Minutes From Broadway,” “You’re A Grand Old Flag,” and “All Aboard For Broadway,” this high-energy show is insightful and entertaining—a delightful salute to the American musical comedy. George M. Cohan Tonight! had its Off-Broadway premiere at Irish Repertory Theatre in 2006. The production earned a Drama League Nomination for Jon Peterson and a Drama Desk Nomination for “Solo Performance.” This is an abridged version of that production, filmed specifically for digital distribution in December 2020. 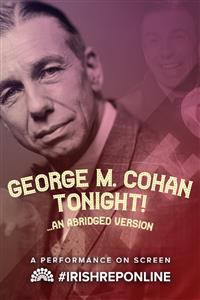