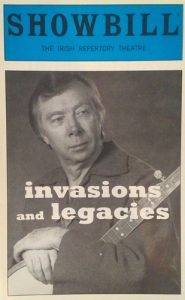 Makem’s show promises to tell the story of the Irish people through “music, song and poetry.” A solo artist for several years now, Makem came to prominence as a member of the Irish folksinging group, The Clancy Brothers. Appearances on “The Ed Sullivan Show” and connections to the mid-60s Greenwich Village folk scene enhanced the group’s reputation in America. Makem sang and penned such standards as “Four Green Fields” and “Farewell to Carlingford.”