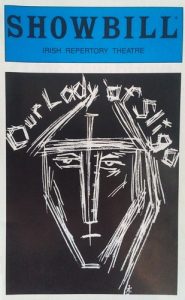 From her hospital bed in 1950’s Dublin, Mai O’Hara recalls her life through morphine-induced memories and hallucinations. Dying of liver cancer caused by alcoholism, Mai reminisces on her youthful promise as a member of the Galway bourgeoisie; the death of one of her children; and of the marriage fueled by liquor, bickering, and remorse, to her husband, Jack who visits her on occasion as does her daughter, Joanie. Jack’s visits to her bedside are a testament to the mutual hatred they share and the mutual dependence they have on each other. Through it all, Mai uses her mordant wit and vanity to pull her out of painful realizations. Once the first woman in Sligo to wear trousers, Mai emerges not only the victim of a broken marriage but a victim of an Ireland in which the Catholic middle-class has been nullified by spiritual and political isolation after the Civil War

“Sebastian Barry has a bounteous gift for turning phrases and spinning tales, and he’s very generous with it in Our Lady of Sligo…spirited and affecting –Variety