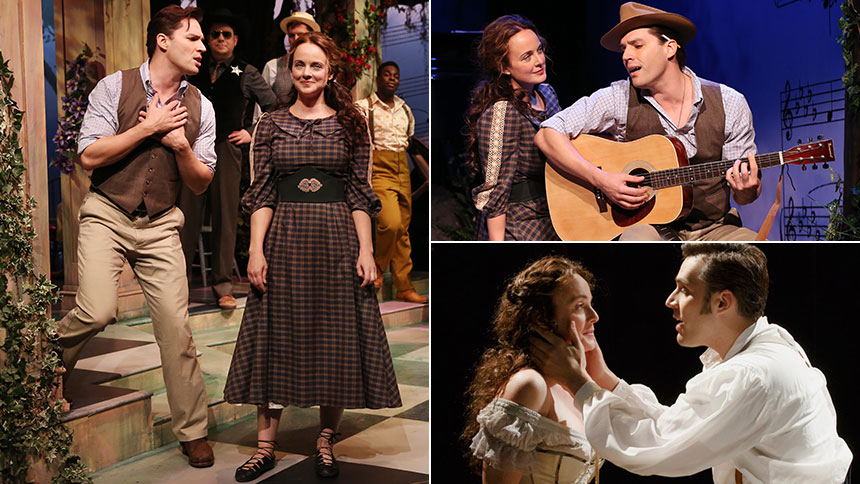 Tony nominee Melissa Errico is back at Irish Rep reprising her acclaimed performance as Sharon McLonergan in the beloved musical Finian’s Rainbow. Sharing that old devil moon is her former Passion co-star and dashing leading man, Ryan Silverman (Side Show, Chicago, Phantom of the Opera). The pair have gone from the passionate Clara and Giorgio to the swooning Sharon and Woody.

BroadwayBox caught up with the dynamic duo to talk about reuniting for Finian’s, cherished Passion memories, and playing with all the crayons in the box.My first impression of my co-star: Ryan:
Free and open. I tend to be a little stand off-ish when I first meet someone or step into a new group, but the first time I met her she was an open book. Very kind and generous. She’s a total nerd and loves studying everything but also love to play around. So it made me very comfortable.

My favorite moment we share onstage together in Finian’s Rainbow: Ryan:
The moment I play guitar for her in Act 2. It’s our first real, quiet moment together with no one else on stage. Where it’s not about “doing” anything. It’s a beautiful genuine moment we get to have with one another. Then I get to serenade her with my guitar.

Melissa:
I like telling him the “old valley legend”… and telling him I’m from Glocca Morra.  It’s like admitting I’m from fairyland but offering him a real human connection.  It’s such a strange and wonderful first encounter between romantic characters.  I love the symbolism and unrealistic sides of Finian’s, and how they co-exist with real natural feeling.  My second favorite is the end when I tell Woody that Glocca Morra isn’t on a map.  He learns it is Hope itself.

Moment I knew we had a special connection:Ryan:
The first time she lied on top of me for our first day of rehearsal in Passion. Haha.  But truly, that’s not an easy thing to do with someone you don’t know well, but we jumped right in, had a good laugh over the ridiculousness of what we do, and felt safe enough with each other to embrace the scene. We built a strong bond of trust in that show.

Melissa:
We had done symphony work together before we did Passion, and he was so much fun in concert.  He makes me laugh and he’s very light-hearted.  But I guess it was during Passion that we developed a lot of trust.  John Doyle demands such honesty and intimacy from everyone.  Ryan and I trusted John, and as a result a bond between us was formed.  A bond that we could share our deepest emotions in that story.

A random backstage ritual we share:Ryan:
Checking each other’s teeth before going onstage and Melissa reminds me to wipe the lipstick off my lips from the previous scene.

Melissa:
Sometimes I remind him to wipe the lipstick off his face after we kiss, and he likes to tell me when I have food or lipstick on my teeth.  I guess we can call this collegial co-grooming!

A small moment we have in the show that I love but audiences might miss:Ryan:
We have a moment where we spin each other around over and over…and over. We usually have a genuine laugh/ terror on our face because it’s a fine line from simply spinning around each other and slipping and taking down everyone on stage like two bowling balls.

Melissa:
When he plays the guitar in Act 2, Sharon thinks he’s so cool when he does these three little finger plucks, like a mini guitar solo.  I usually laugh but really not very obviously.  She thinks Woody is so smooth and dazzling!  (That’s when Ryan hits the right strings!  If he misses, Sharon loves him for trying.)  Ryan is perfect for Woody because he isn’t a worrier—he carries on and things work out.  We both enjoy when things go off plan.  (Problem is when we get giggles, but let’s not discuss this.)

I think our performances work so well together because:Ryan:
We’ve built a lot of trust between the two of us where we can be free to try something and know the other will go along with it. Whether or not it’s right. That’s a great safety net to have.  Great things come from that. She’s giddy and zany one minute and then all serious and focused the next, then deeply moved or tearful. She has lots of colors in her crayon box. It keeps me on my toes for sure, and keeps me flexible and makes me take risks with her. We both are married and have children so we have a strong understanding of what’s important and how to balance career and family.

Melissa:
I love singing with him.  I trust him.  Is that a long enough answer?  We are relaxed.

My most cherished Passion memory of my co-star:Ryan:
All of it. It was my favorite process. It was incredibly challenging for me because I had to go to some pretty dark places and Melissa made it very easy for me to find that in myself. Whether it was the opening scene of being two lovers alone together knowing we were going to be apart from each other, or the heartbreaking scene of that being torn apart and me leaving her there alone on the stage. We were fully immersed in those characters.

Melissa:
Is everything.  Maybe my favorite moment was when the curtain opened (a transition late in the show) and I was ready to tell him my husband is away and we can take a drive into the country.  It was a face to face scene, not a letter.  I remember the intensity of how willing Clara felt and how Giorgio was pulling away.  It was crushing to do.

Another musical I’d love to do together:Ryan:
Sunday in the Park with George. Camelot.  But more than that, I’d love something new to create together.

Melissa:
ALL OF THEM.

I’m in awe of my co-star’s ability to:Ryan:
Be a mother of three beautiful girls and still be able to come to work fully invested, full of passion and want to do all it takes to make her performance and the show as good as it can be.

If I had to describe my co-star as a fictional character:Ryan:
“Mork (from the TV show Mork and Mindy) but better looking.”

Melissa:
There is no mold for Ryan, but if I had to attempt an answer, I’ll say he’s a character actor trapped in Clark Kent’s body capable of being Superman when paid enough.