“this Juno is Irish Rep’s best at its best” – Newsweek

Jack Boyle is out of work and determined to stay that way. He postures and drinks with his sidekick Joxer while his long-suffering wife Juno struggles to support their family and maintain their dilapidated tenement flat. Their son Johnny, crippled fighting in the revolution, cowers indoors to avoid the bitter new civil war, while his sister Mary considers her options for the future. When a handsome visitor arrives with news of an inheritance, the family begins to plan their new life, but their apparent salvation soon reveals itself to be the cause of their ruin. One of the great plays of the twentieth century, Juno and the Paycock is a devastating portrait of wasted potential in a Dublin torn apart by the chaos of the Irish Civil War.

Premiering in 1924, just one year after Sean O’Casey’s professional debut, Juno and the Paycock became the first play at The Abbey Theatre to run for more than one week. Its success allowed O’Casey to quit his road repair job and became a full-time writer at age 44. It has since become one of his most frequently performed plays and has been adapted several times, including into a 1930 film by Alfred Hitchcock and a 1959 Broadway musical entitled Juno. Irish Repertory Theatre has presented Juno and the Paycock twice previously (1995 & 2014), both directed by Charlotte Moore.

Juno and the Paycock (1924), along with The Shadow of a Gunman (1923), and The Plough and the Stars (1926) make up Sean O’Casey’s Dublin Trilogy (or Dublin Plays), presented here in repertory as Irish Rep’s O’Casey Cycle, which established O’Casey as one of the major figures in modern drama. These masterpieces introduced O’Casey’s innovative playwriting style, which balances deeply comic and tragic elements in an atmosphere of stark realism. These plays premiered during a time of revolution and civil strife throughout Ireland, proving both provocative and popular, and establishing O’Casey’s legacy among the most influential and enduring playwrights in history. This spring, don’t miss this rare opportunity to see Sean O’Casey’s full Dublin Trilogy – subscribe to the O’Casey Cycle!

“a family story that will make you laugh and shed a tear… superbly performed… and directed with care.” – Third Coast Review

“a hard and beautiful play, and Neil Pepe’s staging… is lovely” – Stage Voices Subscribe to all three productions in The O’Casey Cycle or become an Irish Rep Member to access the best prices for our special Sean O’Casey Season! Just added – extended dates to the O’Casey Cycle! Now through June 22, 2019! In addition to … END_OF_DOCUMENT_TOKEN_TO_BE_REPLACED On five special Saturdays during the O'Casey Cycle (May 11th, 18th, and 25th & June 15th and 22nd)*, you have the once-in-a-lifetime opportunity to immerse yourself in O’Casey’s world by seeing the full Dublin Trilogy in one day! On “Dublin … END_OF_DOCUMENT_TOKEN_TO_BE_REPLACED When Sean O’Casey wrote Juno and the Paycock 95 years ago, he included a few references that would have been well-known to audiences of the time but are less familiar to contemporary viewers. Here’s some information to keep you in the … END_OF_DOCUMENT_TOKEN_TO_BE_REPLACED

Sean O’Casey is an Irish dramatist renowned for his innovative playwriting style, which balances deeply comic and tragic elements in an atmosphere of stark realism, with emphasis on characterization of working and lower class Dubliners. O’Casey … END_OF_DOCUMENT_TOKEN_TO_BE_REPLACED 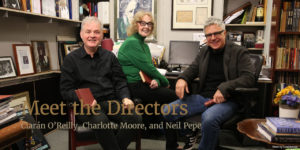